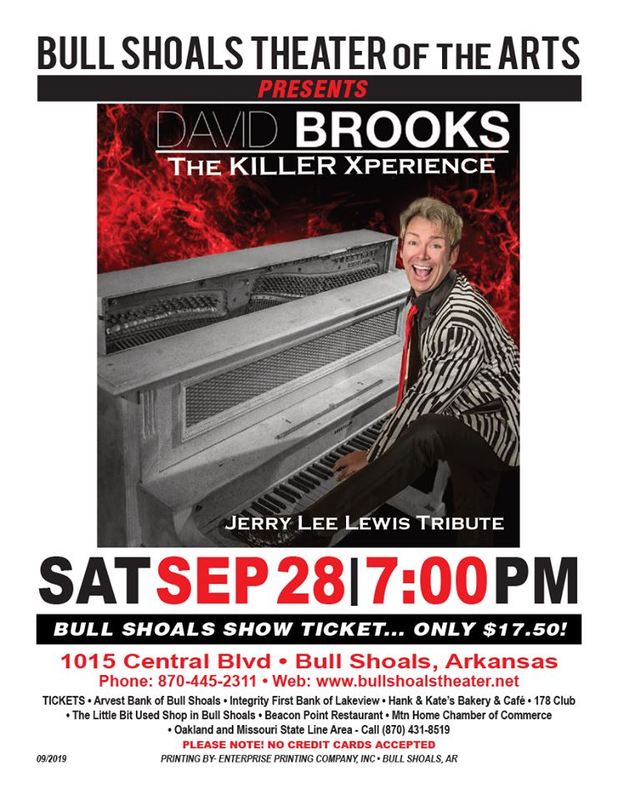 Having portrayed the role of Jerry Lee Lewis in the Tony Award Winning musical Million Dollar Quartet. David knows how to bring 'the Killer' to life.

From Lewis’ humble beginnings in Ferriday, Louisiana, to stages worldwide. Brooks exemplifies why Lewis was called the “bad boy” of rock ’n’ roll.

Experience all of his high-energy songs along with his story.

Brooks will also explore Lewis’ musical influences as well as some artists whom he influenced, songs from artists such as Little Richard and Ray Charles,

with a few surprises along the way. Add in David's homespun humor throughout for an experience you won't want to miss.


For more than a decade, Brooks has been a front man or featured performer in a number of production shows in Branson, Missouri, and other locations.

The highlight of those years culminated in portraying the role of Jerry Lee Lewis in the Tony Winning Musical “Million Dollar Quartet” for its’ first two seasons in Branson.

His piano playing became so highly acclaimed that he won Piano/Keyboard Player of the Year four times.

So 'Come on Over Baby! There's a Whole Lotta Shakin' Goin' on!'